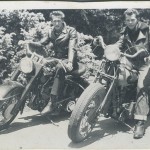 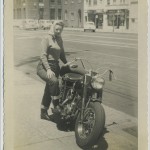 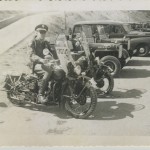 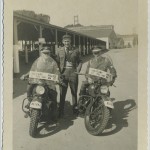 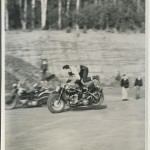 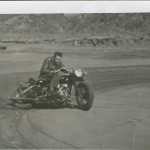 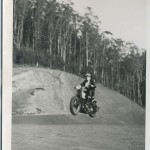 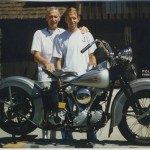 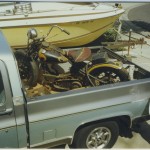 The story of two best friends and a very special1939 Harley-Davidson 61 OHV knucklehead.

This ’39 Harley started life as a police motorcycle. It was sold to the California highway patrol through Dudley Perkins Co. in San Francisco and was in service until 1946 . After World War II , the highway patrol updated it’s fleet, with the Harley being transferred to the Eureka police department in northern California.

In 1948, Lee Wally Shields Jr. was a motorcycle mechanic working at the local Harley shop that was supplying new bikes to the Eureka police department. He bought the bike in late 1948 in fairly rough condition. With limited funds, he did a custom paint job ( black with yellow scallops), removed the front fender and crash bar, removed the back section of the rear fender, changed the handle bars and relocated the license plate and rear lighting.

My father, Robert Lee Lowery, moved to Eureka in June of 1949 after graduating high school. He met Lee Wally at the local roller skating rink and they soon became friends and roommates. They both decided to move to San Francisco, and in April, 1950, joined the United States Army. Both were assigned to the 701st military police battalion stationed at the Presidio of San Francisco. They rode military Harley 45 motorcycles. Their primary jobs: traffic control, escort, and post security. Dudley Perkins supplied many parts for the six army Harley 45s used on the post. Robert took over the Harley mechanic position at the motor pool and knew Dudley Sr. and Dudley Jr. from his many parts runs to the shop. On one occasion, a complete 45 engine assembly was replaced after it failed. Robert sold his 1932 ford for $600.00 and after taking out a loan he purchased a 1949 Harley Hydra-Glide 61″ Panhead that he did some custom work on. Robert got married in November, 1950 and had to borrow a car for the ceremony. Both men took some interesting rides together. In late 1950, they rode up to Twin Peaks reservoir that was under construction. The dirt embankments seemed like a great place to launch the bikes. A full day of fun and the only damage was a slightly flatten rear wheel on the Knucklehead.

March 1951 would be the last time they would ride together. Leaving San Francisco, they were heading to Alum Rock Park in San Jose when the front cylinder on Lee Wally Shields knucklehead came apart. Finding a rope from a local farmer, the Harley was towed home to the apartment. Lee Wally owned a 1940 Mercury and decided to get married that year so the Harley stayed parked.

He received orders in 1952 to Korea and the Harley headed back to Eureka for storage at his parents house. Robert also received orders in 1952 and headed to the Presidio of Monterey. When Lee Wally completed his overseas tour, he was discharged from the army, and attended San Francisco State University . Purchasing a house in 1954, the Harley was moved to San Mateo, California where it remained for over 38 years. Lee Wally was a bit of a pack rat and loved to save things for later use. Over the years, the Harley became encapsulated in the one car garage and was not seen for many years. I did visit his home in 1974 and only heard rumors of the Harley, as the garage was packed floor to ceiling with stuff. The two men stayed in touch over the years as time passed.

In the spring of 1992, Lee Wally was having medical problems. He decided at that time to sell his house and relocate. He had many fond memories of their youth and wanted Robert to have the Knucklehead. Many hours were spent clearing a path to the bike and many others locating all the parts. The Harley was fairly complete except the engine was out of the frame and the cylinders and heads were removed. Robert picked up the bike in May, not knowing the fate of his friend.

Lee Wally was on dialysis for kidney failure and died a short time later.

The Harley had a hard 12 year life on the road, and 41 years of storage didn’t help matters, but at least all the major components were there. Robert decided to restore the Knucklehead back to a police department paint scheme of silver. The bike was completely disassembled and most of the major items were powder coated (frame, front forks, wheels, and oil tank). Some reproduction items were used (both fenders, head light, tail light, tool box and horn). The aftermarket handle bars installed in the 50s got new chrome, as did many other small items on the bike. I came home many times over the years, always seeing progress on the bike. The engine was the last major item installed around August 1997. The bike was finished up in 2000 with just over 525 hours invested. I became the lucky recipient of this beautiful Harley, taking it on a one mile test ride before hauling it out to Arizona. It had a place of honor in the living room for nine years and now that my retirement is here, it’s time to enjoy the bike. Highway Choppers has taken on the task of making the Knucklehead road worthy for me to enjoy for years to come.A special thanks to my father Robert Lee Lowery for taking on this project and staying with it over the years.
Loading Comments...